The Origin of the Universe

Measuring tiny variations in the cosmic microwave background will enable major discoveries about the origin of the universe.

How is it possible to know in detail about things that happened nearly 14 billion years ago? The answer, remarkably, could come from new measurements of the cosmic microwave radiation that today permeates all space, but which was emitted shortly after the universe was formed.

Previous measurements of the microwave background showed that the early universe was remarkably uniform, but not perfectly so: There are small variations in the intensity (or temperature) and polarization of the background radiation. These faint patterns show close agreement with predictions from what is now the standard theoretical model of how the universe began. That model describes an extremely energetic event—the Big Bang—followed within a tiny fraction of a second by a period of very accelerated expansion of the universe called cosmic inflation. During this expansion, small quantum fluctuations were stretched to astrophysical scales, becoming the seeds that gave rise to the galaxies and other large-scale structures of the universe visible today.

After the cosmic inflation ended, the expansion began to slow and the primordial plasma of radiation and high-energy sub-atomic particles began to cool. Within a few hundred thousand years, the plasma had cooled sufficiently for atoms to form, for the universe to become transparent to light, and for the first light to be released. That first light has since been shifted—its wavelengths stretched 1,000-fold into the microwave spectrum by the continuing expansion of the universe—and is what we now measure as the microwave background.

Recently the development of new superconducting detectors and more powerful telescopes are providing the tools to conduct an even more detailed study of the microwave background. And the payoff could be immense, including additional confirmation that cosmic inflation actually occurred, when it occurred, and how energetic it was, in addition to providing new insights into the quantum nature of gravity. Specifically the new research we propose can address a wide range of fundamental questions:

The origin of the universe was a fantastic event. To gain an understanding of that beginning as an inconceivably small speck of spacetime and its subsequent evolution is central to unraveling continuing mysteries such as dark matter and dark energy. It can shed light on how the two great theories of general relativity and quantum mechanics relate to each other. And it can help us gain a clearer perspective on our human place within the universe. That is the opportunity that a new generation of telescopes and detectors can unlock.

How to Measure Variations in the Microwave Background with Unparalleled Precision 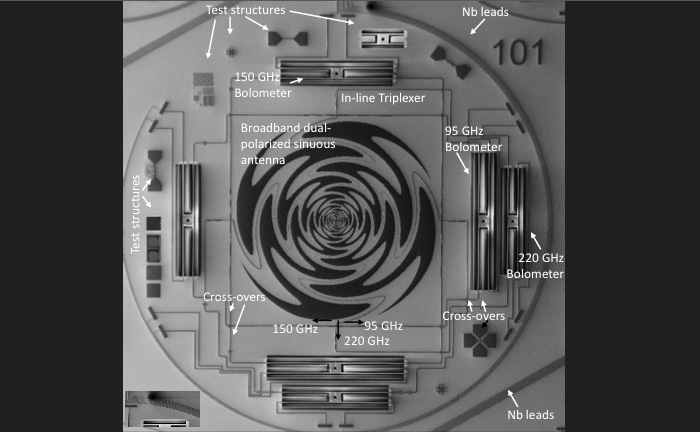 The time for the next generation cosmic microwave background experiment is now. Transformational improvements have been made in both the sensitivity of microwave detectors and the ability to manufacture them in large numbers at low cost. The advance stems from the development of ultra-sensitive superconducting detectors called bolometers. These devices (Figure 1) essentially eliminate thermal noise by operating at a temperature close to absolute zero, but also are designed to make sophisticated use of electrothermal feedback—adjusting the current to the detectors when incoming radiation deposits energy, so as to keep the detector at its critical superconducting transition temperature under all operating conditions. The sensitivity of these detectors is limited only by the noise of the incoming signal—they generate an insignificant amount of noise of their own.

Equally important are the production advances. These new ultra-sensitive detectors are manufactured with thin film techniques adapted from Silicon Valley—although using exotic superconducting materials—so that they can be rapidly and uniformly produced at greatly reduced cost. That’s important, because the proposed project needs to deploy about 500,000 detectors in all—something that would not be possible with hand-assembled devices as in the past. Moreover, the manufacturing techniques allow these sophisticated detectors to automatically filter the incoming signals for the desired wavelength sensitivity.

To deploy the detectors, new telescopes are needed that have a wide enough focal plane to accommodate a large number of detectors—about 10,000 per telescope to capture enough incoming photons and see a wide enough area of the sky (Figure 2). They need to be placed at high altitude, exceedingly dry locations, so as to minimize the water vapor in the atmosphere that interferes with the incoming photons. The plan is to build on the two sites already established for ongoing background observations, the high Antarctic plateau at the geographic South Pole, and the high Atacama plateau in Chile. Discussions are underway with the Chinese about developing a site in Tibet; Greenland is also under consideration. In all, about 10 specialized telescopes will be needed, and will need to operate for roughly 5 years to accomplish the scientific goals described above. Equally important, the science teams that have come together to do this project will need significant upgrades to their fabrication and testing capabilities.

The resources needed to accomplish this project are estimated at $100 million over 10 years, in addition to continuation of current federal funding. The technology is already proven and the upgrade path understood. Equally important, a cadre of young, enthusiastic, and well-trained scientists are eager to move forward. Unfortunately, constraints on the federal funding situation are already putting enormous stress on the ability of existing teams just to continue, and the expanded resources to accomplish the objectives described above are not available. This is thus an extraordinary opportunity for private philanthropy—an opportunity to “see” back in time to the very beginning of the universe and to understand the phenomena that shaped our world.